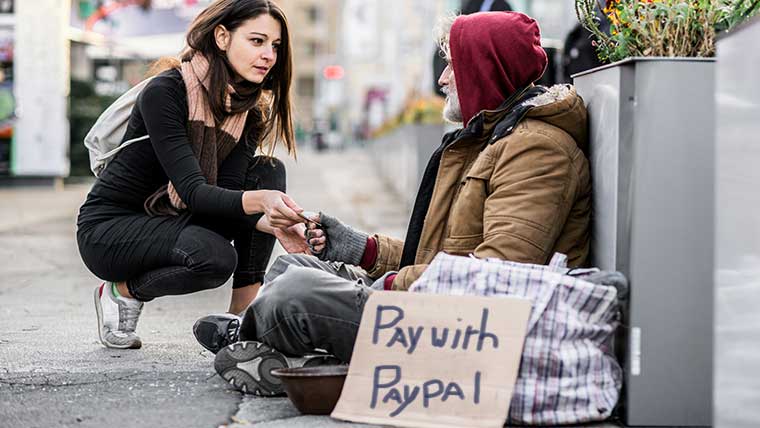 The pound that was in your pocket

The importance of cash in financial inclusion

Cash is dead. Give it five years and no one will use it any more. Everyone knows this, except, apparently, the Bank of England. Is the Old Lady of Threadneedle Street living in a bygone age, or does she know something the rest of us have missed? If we turn to the Bank of England's annual report on notes in circulation, we see that the number of banknotes in circulation has risen every year for more than forty years - and it continues rise. The Bank expects this trend to continue past the middle of the 21st century.

Most of the people reading this article, and I'll add myself in this group, depend less and less on cash. It's not uncommon to leave home with a single five-pound note in our wallets and a few coins in our pockets - and we'll usually return home with that little cache of cash untouched. The queues at the currency exchange bureaux in airports have virtually disappeared. Why bother with the expense of changing money - and then changing it back - when the plastic in your purse handles it all so much more conveniently?

But we're a privileged group. We have bank accounts, credit and debit cards, PayPal accounts and mobile phones that magically pay for things. But one and a half million people in the UK don't have any of this. A lot of them are happy with that, but some simply have no choice, and many of those are the most financially vulnerable.

So maybe The Bank of England has it right after all, and the rumours of the demise of cash are exaggerated. The banknotes will survive, but what about the people who depend on them?

Even though the demand for banknotes continues to increase faster than the amount of spending in the UK economy, the mechanisms for supply and processing are disappearing at an alrming rate. ATMs are disappearing fast, and many rural communities now have nowhere local to obtain cash. On average, UK banks have closed twenty local branches a week over the last three years, the majority of them in low-income areas. This creates serious problems for cash businesses like window cleaners, take-aways and corner shops. Faced with a long trip to a cash-accepting bank, many businesses store several days' takings, creating serious risk from theft.

But, if it's a problem for small businesses, it's a disaster for the 1.5 million unbanked people in Britain. For them cash is the only medium of exchange. Its unavailability becomes a question of personal survival. The Financial Inclusion Commission sets out a vision to connect every individual to the banking system, which is a laudable aim, but the Financial Inclusion Taskforce conducted a study in 2010 which revealed that only half of the unbanked population actually wanted to open a bank account. Are we to ignore their wishes? It may be that the improved access to financial education described by the Commission will modify this attitude, but financial inclusion demands that the cash alternative remain.

Sadly, the economics are against us. It's difficult for a commercial body to justify staffing branches or providing ATM services in areas where they're unlikely to repay their costs. It's time to apply lateral thinking; time to look at how we make it possible rather than bowing to what we see as inevitable. Choice has partnered with the likes of Clear Bank, RMS, Brinks and Loomis to provide a solution to cash availability in the regions that most need it. We're rolling out secure cash deposit facilities to help busineses service their cash customers, and supporting an initiative to re-introduce free ATM service to areas that no longer have access to them.

If the current economic model means excluding those most vulnerable in our society, then we must change the model.